Sega
A reprint collaboration event with the battle-type card action game “Eiketsu Taisen Sansen Sekai no Hado” and the TV anime “Kingdom” will be held from November 23 (Wednesday / holiday)!
Campaign where SR Shin and SR Rimaki can be acquired in 1 play ……………………………………………………………………………………………
Sega Co., Ltd. will hold a reprint collaboration event with the TV anime “Kingdom” in the fighting card action game “Eiketsu Taisen Sansen Sekai no Hado” (hereafter, “Eiketsu Taisen”) for amusement facilities, which is currently in operation. It will be held from Sunday (Wednesday / holiday).
“Eiketsu Taisen” is a competitive card action game played by manipulating real cards. In addition to the military commanders who have appeared in successive series “Sangokushi Taisen” and “Sengoku Taisen” that have created the history of arcade games, new warlords from “Edo / Bakumatsu” who are popular with history fans will appear. In the future, we plan to participate in various historical heroes. It is the latest work that can be said to be the culmination of the Great War series.
This collaboration event will be a reprint of the collaboration held in April this year. Popular characters from “Kingdom”, including the main characters Shin and Eisei, appear as actual military commander cards. You will fight on the same battlefield as the warlords of “Eiken Taisen”.
In addition, a “Great War Stamp Campaign” will be held in conjunction with the collaboration. During the campaign, you can get SR Shin and SR Riboku in one play, and stamps are pushed every time you play, and you can get other collaboration warlords and consumable items according to the number of stamps.
[Image 1 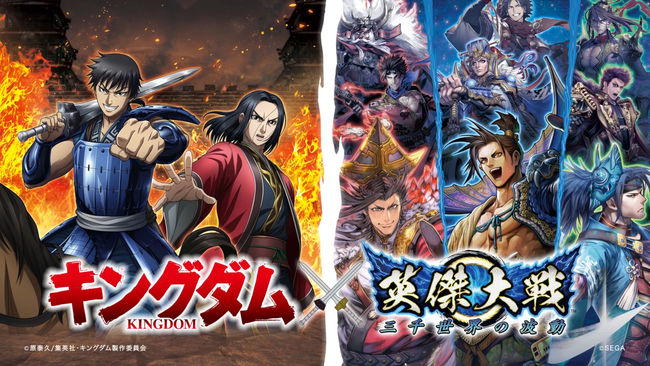 “Kingdom” ⚔ “British Great War” Reprint Collaboration WebCM: https://youtu.be/Uq3QqfPNO4Q
■ Get collaboration warlords in the “Kingdom ⚔ Heroic Great War Collaboration Stamp Campaign”!
During the campaign period, you will receive a stamp every time you play. Depending on the number of stamps obtained, you will receive collaboration warlords and consumable items. In addition, the campaign is divided into the first half and the second half, and the rewards you can get for each are different. In addition, during the
collaboration period, you can get SR Shin in the first half and SR Riboku in the second half just by playing one. don’t miss this opportunity
Campaign period: [First half] November 23, 2022 (Wednesday) 7:00 to December 6, 2022 (Tuesday) 27:59
[Second half] December 7, 2022 (Wednesday) 7:00 to December 20, 2022 (Tuesday) 27:59
Campaign overview: https://info-eiketsu-taisen.sega.jp/archives/1228 [Image 2

*For clarity, 3:59 a.m. the next day is written as 27:59 in announcements, etc. *For details on campaign rewards, please check the campaign overview page on the official website.
*If you want to print the acquired officers as cards, you need to play the game on a satellite and print from “Card Print”.
■ What is “Kingdom”?
Manga “Kingdom” by Yasuhisa Hara, which is very popular in “Weekly Young Jump” (Shueisha)
The story is set in China during the Spring and Autumn Warring States period, and depicts the activities of Shin, a boy who aims to become a great general, and Eisei, a young king who later becomes the first emperor. The manga won the 17th Tezuka Osamu Cultural Prize Manga Grand Prize in 2013.
In April 2019, it was made into a live-action film for the first time, recording a huge hit of 5.7 billion yen at the box office and becoming a social phenomenon.
The original comics are on sale from 1 to 66 volumes. Cumulative sales exceeded 92 million copies.
The TV anime was broadcast in the 1st series from 2012, the 2nd series from 2013, the 3rd series from April 2021, and the 4th series from April 2022.
The 5th series produced under the supervision of original author Yasuhisa Hara will be broadcast in January 2023!
(Broadcast schedule is subject to change)
Official site
https://kingdom-anime.com/
Official Twitter
https://twitter.com/kingdom_animePR
(C) Yasuhisa Hara/Shueisha Kingdom Production Committee
【Product Specifications】
Name: Eiketsu Taisen Three Thousand World Waves
Genre: Competitive card action game
Operation date: Thursday, March 10, 2022
Number of players: 1
Right notation: (C) SEGA
Official website: https://www.eiketsu-taisen.com/
Official Twitter account: @eiketsu_taisen
Taisen Series Public Relations Twitter Account: @taisen_ko_ho Details about this release:
https://prtimes.jp/main/html/rd/p/000000053.000016101.html